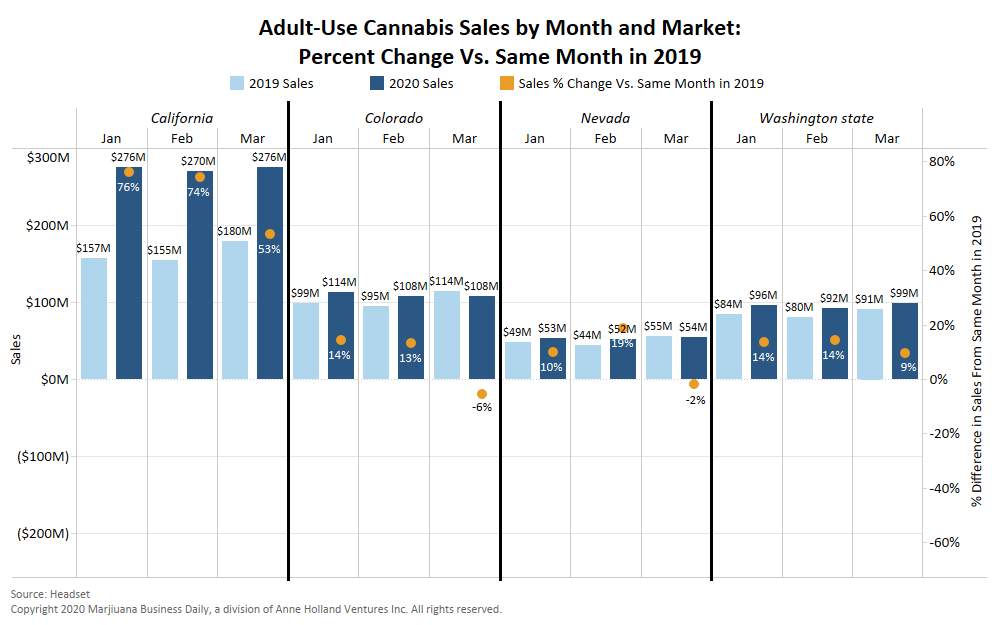 Recreational cannabis sales in four key markets decelerated in March as the COVID-19 crisis continues to disrupt both the cannabis industry and the broader U.S. economy.

According to point-of-sale data provided by Seattle-based Headset, recreational cannabis sales in Colorado and Nevada declined from March 2019 to March 2020, the first time that monthly adult-use sales in either state reported a year-over-year decrease.

Adult-use cannabis sales in California and Washington state still rose in March 2020 compared to March 2019, but the growth was less than would be expected under normal business conditions.

The declines were most acute in the latter half of March, despite a few notable sales spikes prompted by fears that state officials might force cannabis retailers to shut down.

For March 1-15, adult-use cannabis sales were up over the same period a year ago by:

The sharp declines in the back half of March suggest that sales for the full month of April – home to the biggest cannabis sales day of the year, 4/20 – could fare even worse.

Amid the coronavirus-driven downturn, several large, publicly traded cannabis companies have scaled back operations and laid off workers to cut costs.

The pandemic also has spurred a shift in consumer spending habits – with dollars moving away from pre-rolls and toward edibles – and compelled cannabis companies to alter their 4/20 holiday plans.

Eli McVey can be reached at [email protected]

For more of Marijuana Business Daily’s ongoing coverage of the coronavirus pandemic and its effects on the cannabis industry, click here.